Norwegian Cruise Line’s latest and greatest ship just set its US inaugural voyage. The Prima was just launched earlier in the fall of 2022 in Iceland. We just it sailed from New York to Halifax.

This is their most luxurious offering to date and while some folks may miss the “fun in the sun” party vibe found on their previous vessels, as someone who loves fine spirits and a well-crafted cocktail as well as the occasional cigar – I was in for a treat. Here are four things that spirits lovers will enjoy while sailing on Norwegian Prima. 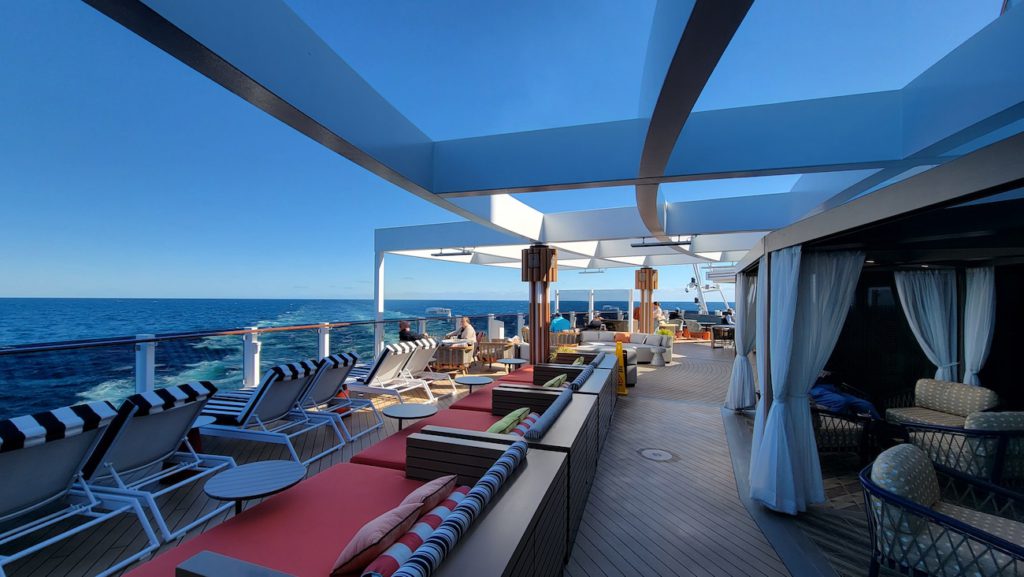 While other cruise lines are catering to kids and families, Norwegian is offering an alternative experience and has decidedly targeted a more upscale audience. Unlike every other cruise line that keeps going bigger and bigger – at 142,500 gross tons and 3,215 guests at double occupancy, it is actually considerably smaller than its predecessor, Norwegian Encore which comes in at 169,145 gross tons and nearly 4,000 guests.

Along with this, as you walk around it is clear that this is something more than just a Caribbean booze cruise experience. Everything from the chairs to the millions of dollars of artwork speaks to an elevated experience that rarely exists outside of small ship experiences like Norwegian’s sister brand, Oceania Cruises.

This thankfully extends to a carefully crafted cocktail program where they have even switched from standard barware glasses to Riedel. This may be a small change that most cruises will never notice but it was a welcome addition that brings the feel of the cocktail glass in your hand to the same level of the bartender serving it to you in “The Whiskey Bar”. 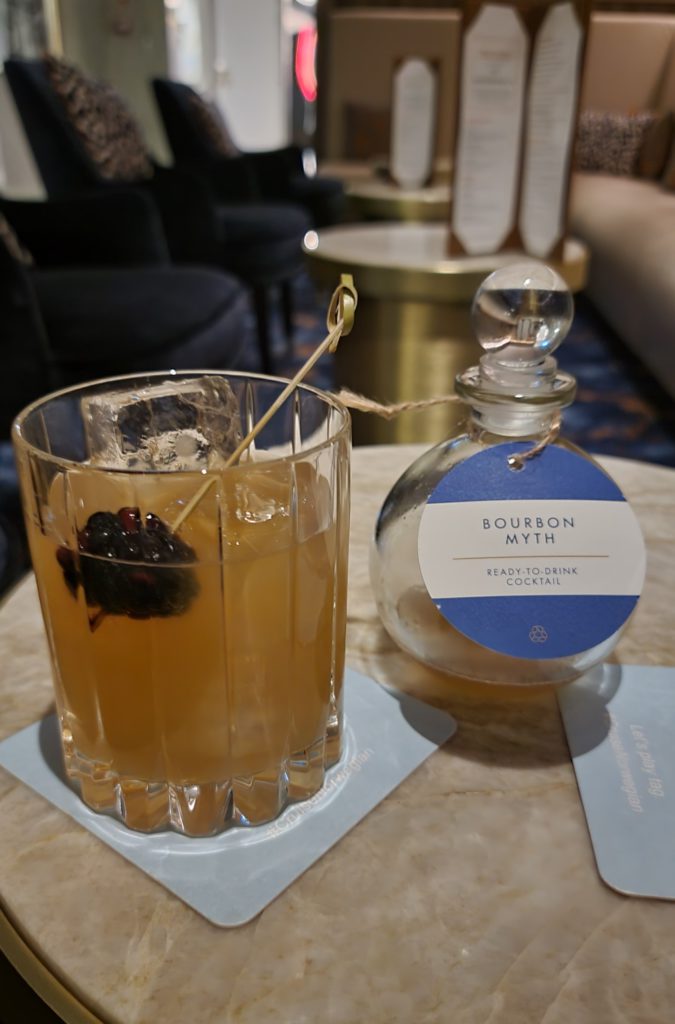 One of the challenges that all cruise lines are facing right now is staffing and supply chain issues. This is true on luxury small ships as well as bargain basement lines alike. It has frustrated me personally to request a favorite cocktail, only to be met with, “I’m sorry sir – we’re out of [ingredient]”.

Likewise, a few months ago on a different cruise, I had some of the absolute worst cocktails that I’ve ever experienced at sea … but the next day a different bartender served up perfect ones. 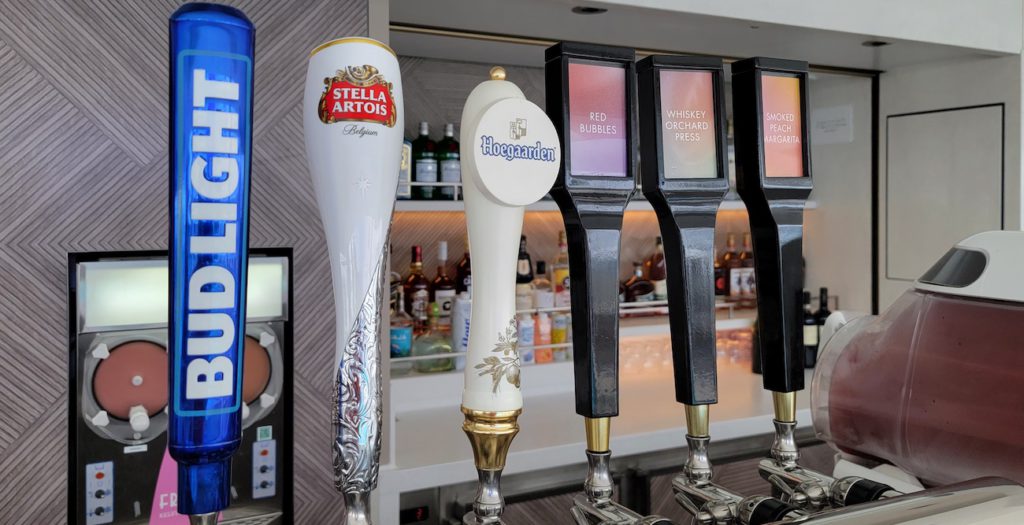 With Norwegian’s investment into Cocktails On Tap, they are able to deliver precision-crafted cocktails that are made fresh daily and they are delivered quickly and perfectly made each time.

While they tend to be sweeter and lower in alcohol, they are also very very good!

This concept obviously works better in some venues than others, so on Prima, they have also introduced Bottled Cocktails which are essentially the same as the On Tap program but served to you in a small bottle that is then poured into your glass in front of you.

Little touches like this are a welcome addition to their overall cocktail program since we already know that Norwegian is among the best at sea when it comes to their bar staff’s skills. 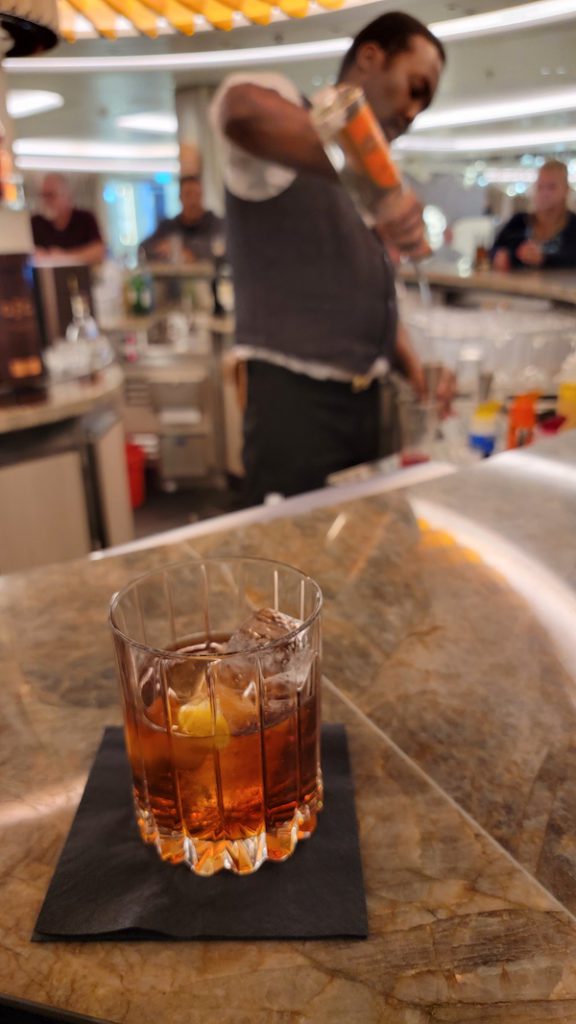 Just before the pandemic when we were on the inaugural cruise for Norwegian Encore they introduced a concept program to promote their sustainability program. This included cocktails made from pineapple pieces and day-old pastries that would otherwise have been discarded. Instead of creating more waste, they were able to reuse these items as components to feature in various cocktails.

As much as I support this idea – it was pretty silly to think that even the most thirsty group of travelers would have a major impact on reducing waste in this way.

While on Norwegian Prima though, they introduced an entire program at the Metropolitan Bar based around this concept. This included not just more cocktail options but also a portfolio of featured brands that they have decided meet their threshold for being examples of sustainability. would be growing and featuring. This includes brands like Flor de Cana ECO rum and Star Rum but also a house brand that the line is growing called ‘66 By Norwegian.

The new private label house brand ‘66 Gin was introduced here, along with their new ‘66 beer which was available on draft. 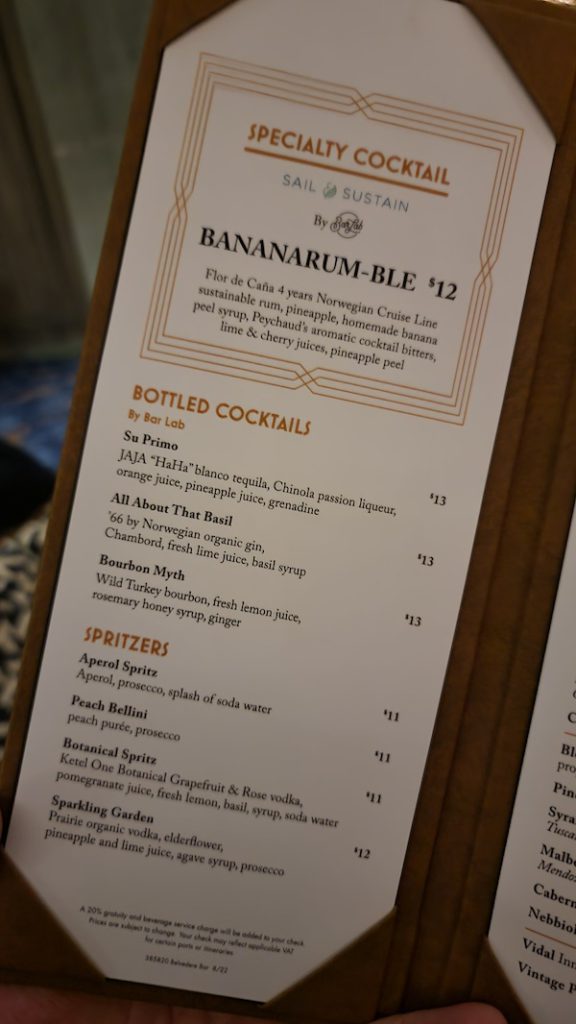 We love Norwegian’s efforts towards sustainability and ready-to-drink cocktails but sometimes all you want is a perfectly prepared Old Fashioned or maybe you just need a premium Scotch to sip on while talking with friends about your plans for the next day’s adventures. Thankfully, Prima excels here as well with the appropriately branded “The Whiskey Bar.”

Located mid-ship, this quickly became my favorite place on the ship since it was located in a perfect location and had plenty of seats around the bar as well as even more comfortable chairs spread throughout the space as well.

Whiskies available here include premium spirits like Macallan Terra as well as more affordable options from all of your favorite brands such as Makers Mark, Woodford, Talisker, Dewars, and Jameson.

While we were sad that this venue replaces the classic Maltings Whiskey Bar found on other Norwegian Ships, I welcome the addition of a brighter and more fun space vs the darker more intimate Maltings. 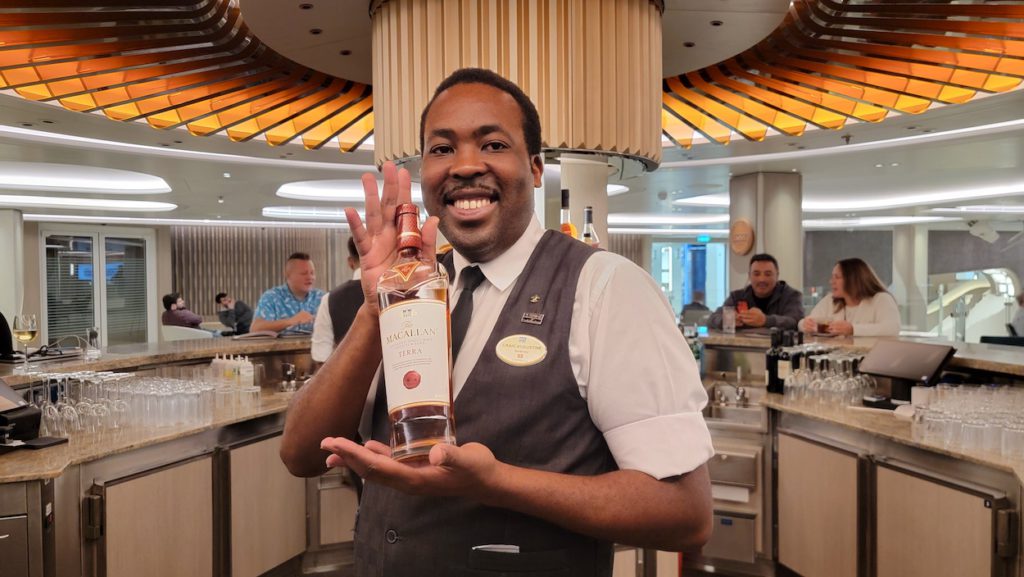 Technically the cigar area isn’t a bar and it is also no longer an extension of Maltings like it is on the previous few vessels. Additionally, it no longer has a door that leads directly to the open deck.

However, ventilation seemed excellent and it is located directly adjacent to the Metropolitan Bar where we found one of our absolute favorite Norwegian Cruise Line bartenders whipping up sustainable cocktails and some of the best rum drinks found anywhere on the ship. Don’t worry though, for you Tequila, Scotch, and Bourbon guys Metropolitan Bar is fully stocked with sustainable brands and they can bring pretty much anything else into that space that you might desire. 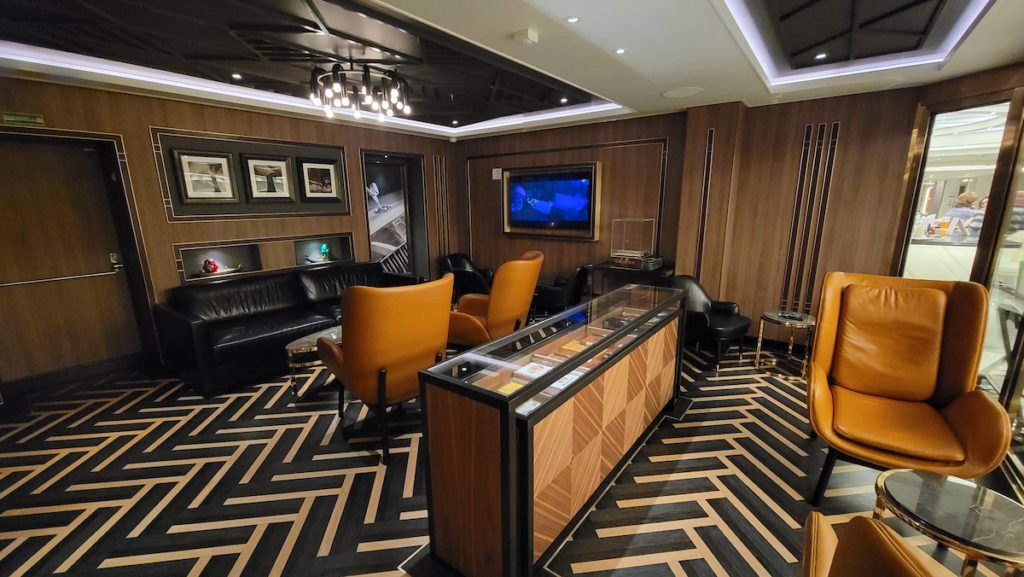 Overall, it was quite impressive to see the evolution of Norwegian’s drinks program and how they’ve twisted it from something focused on Caribbean fun-in-the-sun into a much more upscale experience. We had an incredible experience cruising the cold waters of Canada and New England and this would be an equally excellent ship for an Alaska cruise, but it will be interesting to see what the ship is like in warmer waters where we’ll want to enjoy Mai Tai’s and frozen cocktails alongside our Old Fashioneds.

I’m not worried about that though since I already know they can do that. This though, is something new and a welcome addition to big ship cruising and I like it! 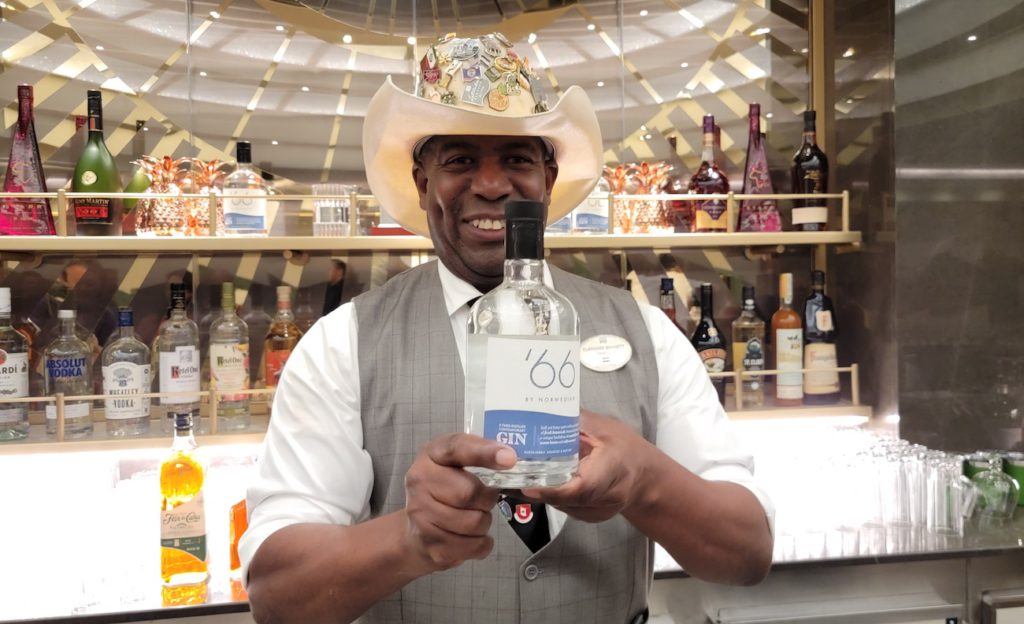 James Hills is the founder and publisher of ManTripping.com. It is the top Men’s Lifestyle & Travel Blog covering food, wine, spirits, fishing, trucks, gadgets, sports, and fashion for men, dads, & the women who love us.