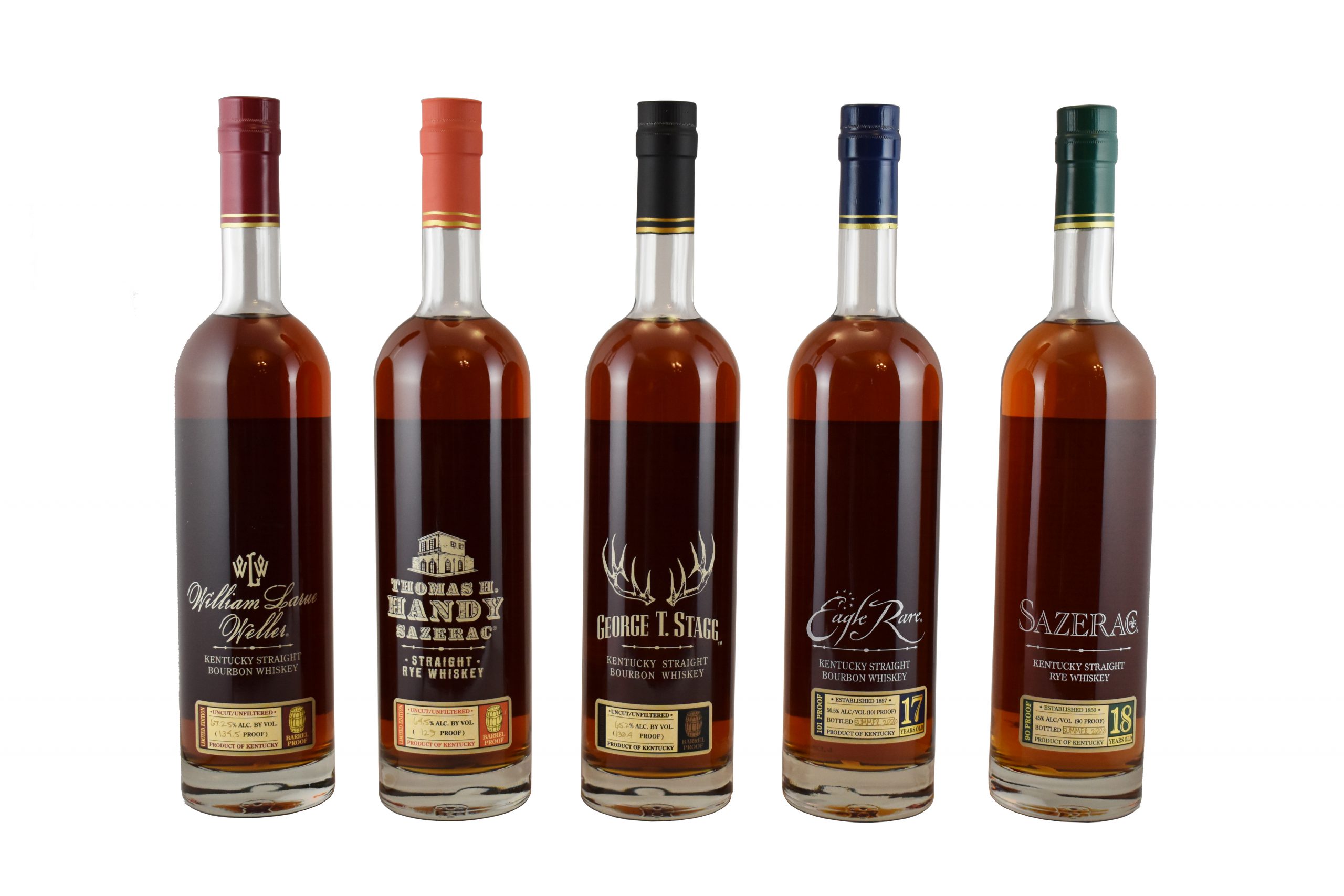 With the year we’ve all had in 2020, something good to look forward to is welcomed, right? Buffalo Trace Distillery tells BourbonBlog.com they are releasing its 2020 Antique Collection of whiskeys (BTAC). Be watching for them in September and October.

The highly regarded collection will once again feature five limited-release whiskeys of various ages, recipes, and proof. Here is what to expect from each below according to Buffalo Trace.

This 101 proof whiskey was distilled in Spring of 2002 and aged on the first floor of Warehouse P. The 2019 release of this bourbon was named “Best of Category” at the Los Angeles International Spirits Competition. This bourbon has a nose of ripe cherries, vanilla cream and oak, followed by a taste of caramel and coffee and a long finish of oak, pepper and fresh herbs.

The proverbial powerhouse favorite of the Antique Collection, George T. Stagg, comes in at 130.4 proof this year. Last year’s release was awarded 97 points in the 2020 Ultimate Spirits Collection, and fans will find the familiar Stagg taste profile they know and love with cinnamon, caramel and cherries on the nose, and a creamy vanilla with lightly smoked oak on the palate. The finish is black coffee, dark cherries and herbs.

This year’s release contains bourbon from barrels filled in the spring of 2005. Storage location of these barrels varied across warehouses L, K and Q. The evaporation loss for this year’s batch was 59%, a bit higher than the last few year’s releases.

The Antique Collection’s uncut, unfiltered, wheated recipe bourbon is William Larue Weller. Previous editions of this wheater have won many accolades, including the 2019 release receiving a Gold Medal at the Los Angeles International Spirits Competition and also named 2nd finest whiskey in the world in the esteemed “Jim Murray’s Whiskey Bible.” The 2020 release was distilled in the winter of 2008 and aged in Warehouses I and C. This bourbon registers at 134.5 proof. Flavors of a soft caramel chew, spearmint and cinnamon can be found on the palate in this year’s offering.

Thomas H. Handy is the uncut and unfiltered straight rye whiskey. Last year’s release earned The Chairman’s Trophy, scoring 99 points at the Ultimate Spirits Challenge and was also named 3rd finest whiskey in the world in “Jim Murray’s Whiskey Bible.” This year’s Handy was distilled in the spring of 2014; aged in warehouses K, M, and N, and weighs in at 129.0 proof. The flavor profile includes cinnamon, anise and honey.

The previous edition of Sazerac Rye 18 Year Old was named “Best Rye Whiskey Aged 11 Years and Over” by “Jim Murray’s Whisky Bible.” This 2020 straight rye whiskey release has notable flavors of oak, caramel and dark chocolate, with a finish of coffee, black pepper and cherries. The barrels for this whiskey were filled in the spring of 2002 and it rested on the third floor of Warehouse K. It is bottled at 90 pro