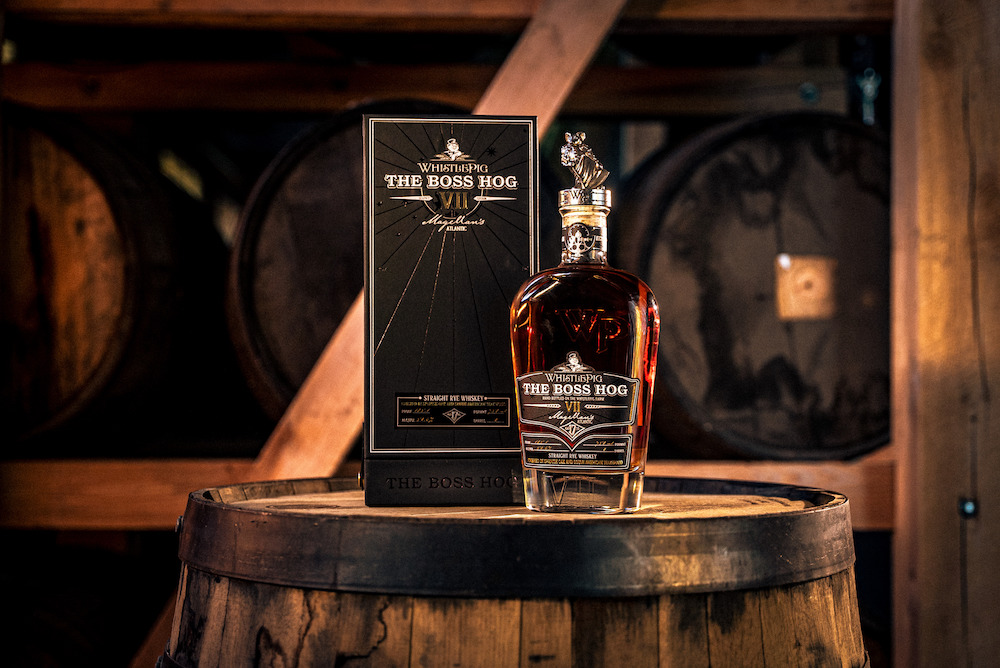 The Boss Hog VII: Magellan’s Atlantic is available in a 750ml, bottled at Proof 105.1-107.8 (52.6-53.9% ABV) with a suggested retail price of $499.99. Like the other editions of The Boss Hog before it, Magellan’s Atlantic will be sold at a variety of premium liquor stores, bars, and restaurants across the United States, entering select international markets in the coming weeks, and is now available for pre-sale via Caskers.com.

The limited-edition features Straight Rye Whiskey aged for 17 years in American Oak, then finished in rare Spanish Oak, followed by a second finish in South American Teakwood casks – a journey truly representing the award-winning brand’s pursuit to deliver unprecedented whiskey to the market.

Inspired by the first recorded circumnavigation of the earth, The Boss Hog VII: Magellan’s Atlantic captures the historic voyage of an intrepid crew who embarked from Spain in 1519 and made landfall in present-day Brazil before navigating the perilous strait that would come to bear their captain’s name. Like Magellan’s daring endeavor, the path for finishing this precious, aged whiskey was anything but certain.

WhistlePig’s Spanish oak casks originate in the mountainous forests of Northern Spain (Cantabria). Unlike American white oak, this Spanish oak is high in tannins, knotty, and porous. It is incredibly challenging to make staves from and the final casks are prone to leakage and excess evaporation. While difficult to source and dangerous to use, the wood delivers intense flavors, with heightened interaction between spirit and oak, creating unparalleled complexity in the whiskey. 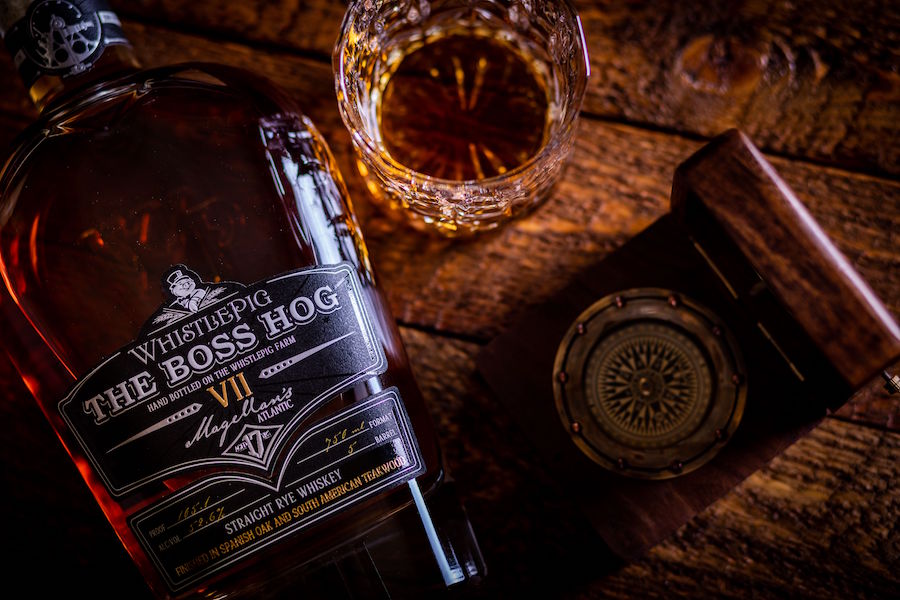 While previous editions of The Boss Hog were finished in one outstanding cask, WhistlePig’s young and imaginative whiskey team sensed there was another step in the journey to fully unlock the potential of The Boss Hog VII. For its final finish, South American Teakwood casks are sustainably sourced from Brazil. The new Teakwood adds rich notes of baking spices and a sweet, toasted character, complementing the intense spiciness of the Spanish oak.

“We have experimented South American Teakwood on just a handful of barrels in the past, and both this and the New Spanish Oak are uncommon in the whiskey world,” says Meghan Ireland, Maturation Chemist, WhistlePig. “It’s been the least predictable and most intensive edition of The Boss Hog to date, but well worth the trials and effort.”

“The Spanish oak casks deliver a unique and unparalleled flavor and South American Teakwood was among the most coveted Bespoke Barrels in our exclusive Single Barrel program. We anticipated that the combination would make for an unprecedented taste and we couldn’t be happier with the result,” says Jeff Kozak, CEO, WhistlePig.

“Our 17-year-old straight rye whiskey spends three weeks resting in Spanish oak before finishing in South American Teakwood for just three days. The whiskey world has never before seen this truly one of a kind combination of casks, nor has it tasted anything quite like the resulting product and liquid it has produced,” says Pete Lynch, Master Blender, WhistlePig. “A one-hour proprietary toast with the Spanish oak creates a small char layer that removes some tannins but preserves the good ones. A medium-level toast grants incredibly aromatic cinnamon, allspice, and roasted nut flavors, while softening the overall intensity of the greener wood notes in the finishing cask.” 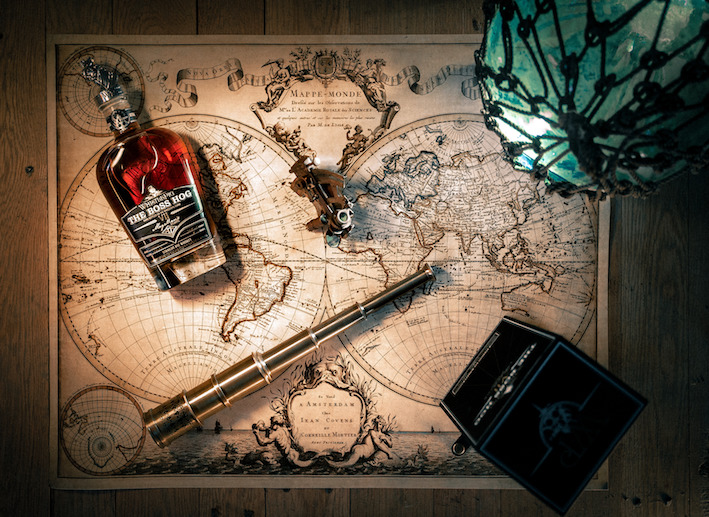 The Boss Hog VII: Magellan’s Atlantic is presented in a gift box documenting the quest and crowned with a collectible pewter topper depicting Magellan as a pig in traditional Spanish dress, bravely taking up his sail and an explorer’s staff at the outset of his journey.

Magellan’s Atlantic is just the beginning of WhistlePig’s journey around the globe. Collectors are invited to join the expedition by registering their bottle at TheBossHogVII.com. Using the unique code found on the bottle’s neck label collectors are able to access exclusive content and, in time, discover what lies ahead on the Pacific horizon.

As BourbonBlog.com has always followed the release of THe Boss Hog collections closely and we first told you about it years ago when the brand launched it, below is an excellent photo of all the Boss Hogs so far. 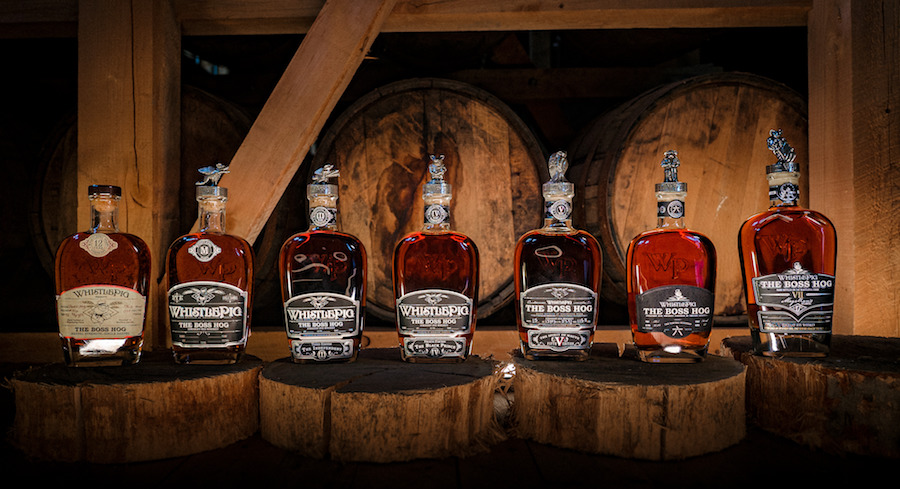