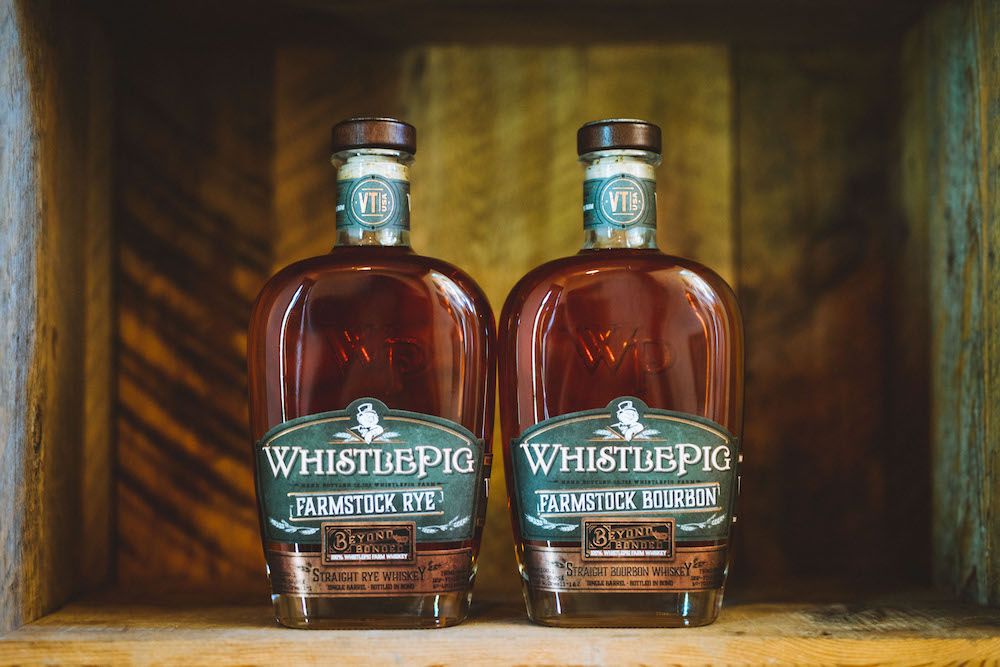 WhistlePig Whiskey tells BourbonBlog.com they are releasing two new expressions which are the first 100% fully harvested, distilled, aged, and bottled whiskeys from the brand as part of their “Triple Terroir at the WhisltePig Farm and Distillery in Shoreham, Vermont. This also marks the first release of a Bourbon whiskey ever from WhistlePig.

As WhistlePig aptly has creative touch and story to naming their expressions, both of these are single barrels that go “Beyond Bonded” as the name suggests. They are both 101.1 proof and over 4 years in age.

In fact, the oldest barrel in the release was aged for four years, 8 months, and 14 days.

With just 24 barrels of Rye and 16 barrels of Bourbon in the 2021 release, Beyond Bonded FarmStock Rye and Bourbon are among the rarest and collectible whiskies ever produced from the WhistlePig Farm.

These releases are both hitting shelves across the United States during June 2021, with no barrel or bottle being exactly alike. The MSRP is  $99.99 per 750ml bottle. The next limited release of Beyond Bonded is expected in Spring 2022.

On my recent visit to WhisltePig Farm and Distillery, I experienced some early versions of these 100% grain-to-glass whiskeys from the WhistlePig Farm. I’m sharing more below on that.

The third and final edition WhistlePig FarmStock “Crop #3“, featuring 52% Farm-to-bottle Rye, will continue to be available alongside the limited release FarmStock Beyond Bonded Rye. 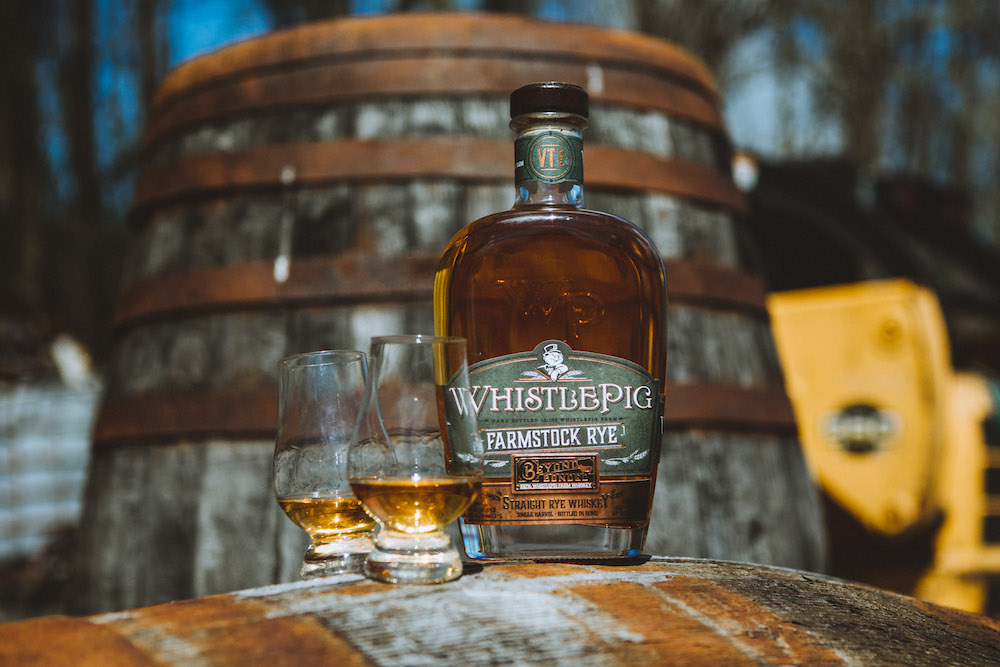 is a Straight Bourbon Whiskey made with a high rye mash bill clocking in at 51% Dent Corn and 49% Remington and Rifle Rye varietals harvested from ‘North Orwell 1’ and ‘North Orwell 2’ fields. Both whiskeys were distilled on WhistlePig’s original hybrid still, ‘Mortimer’, proofed with water from WhistlePig’s Farm well, and aged for upwards of four years in Vermont Estate Oak barrels which were produced from local Vermont oak. 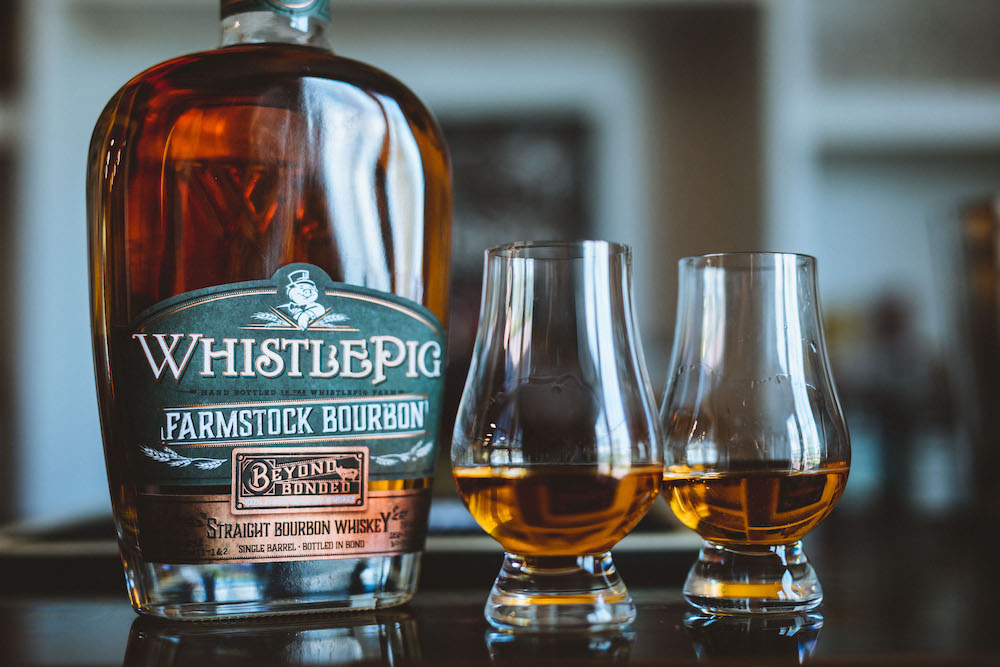 WhistlePig FarmStock collectors will be able to trace the Farm-to-bottle journey via a unique QR code on the label. Each code reveals thirty unique facts about their individual whiskey, from growing conditions to fermentation days to barrel specs to bottling team.

“Today’s craft spirits drinkers, especially whiskey collectors, are incredibly knowledgeable and passionate about process,” Jeff Kozak, CEO tells us. “After working toward a 100% Farm whiskey vision for more than a decade, our team is proud to invite WhistlePig fans to look under the hood at who, where, when, and how our grain-to-glass whiskey is created, and to offer a one-of-a-kind experience from each barrel.”

Beyond Bonded Bourbon takes the whiskey world by surprise as WhistlePig’s first-ever Bourbon release, after quietly seeding, harvesting, and distilling the grain alongside their Rye varietals and other experimental crops.

Behind the scenes at WhistlePig, you’ll find Distiller Emily Harrison. Beyond Bonded Bourbon is especially close to her heart, having started out in Kentucky’s large bourbon distilleries before discovering her true passion for craft whiskey, and following it to Vermont.

Recently, I spent some time with Emily at the WhistlePig Farm and Distillery in Shoreham, Vermont. Watch the video below or on this link as Emily describes the process of Koji and wild yeast fermentation.

WATCH: Interview and tasting with Emily Harrison at WhistlePig Farm and Distillery

Emily leads a team of 4 distillers at WhistlePig Farm and manages the Farm-to-bottle process from the beginning. This includes creating crop plans with WhistlePig’s farmer, checking the quality of the mash ingredients and distilled whiskey, and creating schedules for mashing, fermentation, and distillation. Emily works closely alongside Meghan Ireland, WhistlePig’s Chief Blender, who in college, after reading an article about a female chemical engineer turned Master Blender, knew that she also wanted to get into the craft spirits industry.

At the WhistlePig Farm, Meghan picks up when the barrels are filled, seeing the process through to ensure WhistlePig maintains its award-winning quality and taste.

“Beyond Bonded has been our most ambitious experiment to date. Whiskey making is a labor of love, with challenges at every step of the process” Emily Harrison, WhistlePig Distiller tells BourbonBlog.com.

“In Vermont, the short growing season and extreme temperatures make for much tougher farming than in the south. After harvest, Rye is a notoriously difficult grain to distill, but we’ve always believed that the benefits of its complexity are well worth the effort. FarmStock Beyond Bonded shows its incredible potential once again, in both Rye and Bourbon. Seeing it leave the Farm is a dream come true.”

Earlier this month, to debut the Beyond Bonded collection, the first-ever barrel of Beyond Bonded FarmStock Rye, Barrel No. 0001, was auctioned off at Dana Mecum’s 34th Original Spring Classic in Indianapolis. After whiskey fans across the country bid on Barrel No. 0001, the winning bid resulted in a total contribution of $100,100.00 to Farm Aid. 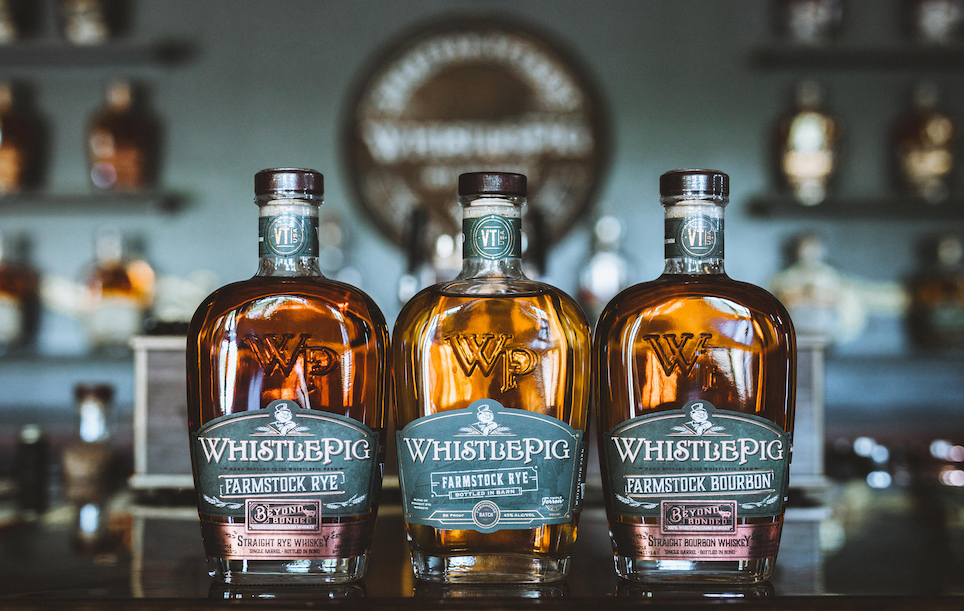