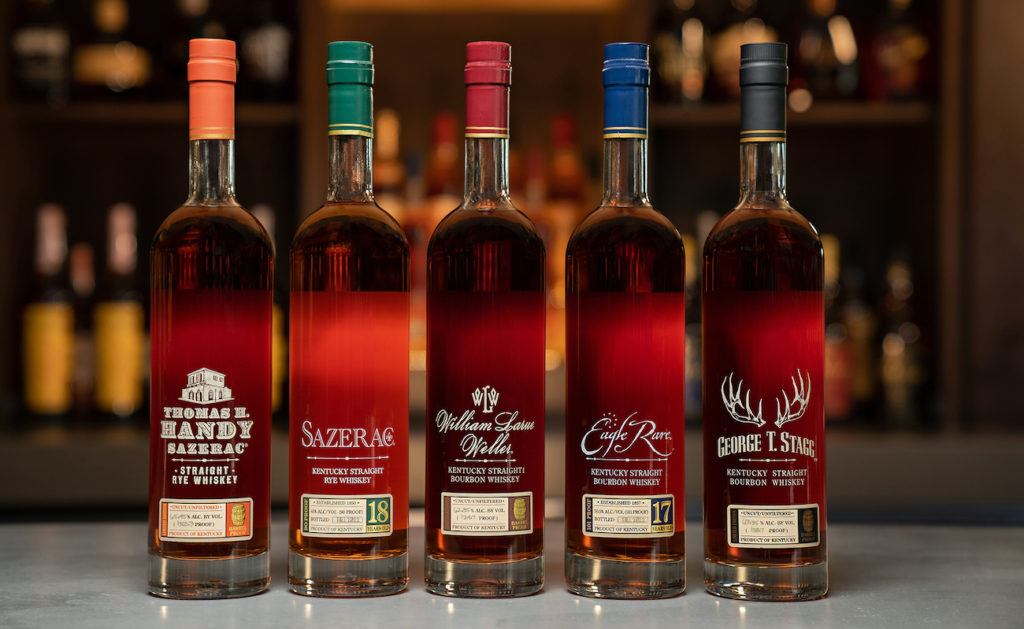 Buffalo Trace Distillery tells BourbonBlog.com they are releasing its full lineup of the 2022 Buffalo Trace Antique Collection (BTAC) this fall, including perennial favorite George T. Stagg – this year at 138.7 proof.

Last year, Buffalo Trace opted not to release its uncut, unfiltered 15-year-old George T. Stagg Bourbon because it did not meet the Distillery’s standards for the Stagg brand.

The full tasting notes that are specific to 2022 of each are included below and from the distillery.

This year, they tell us they are happy to report that the 2007 Stagg barrels showed up with their classic Stagg presence, full of maturity, balance, and flavor, with a hefty proof at 138.7, its highest proof since 2016.

The five ensemble members of the Antique Collection are George T. Stagg Bourbon, William Larue Weller Bourbon, Thomas H. Handy Sazerac Rye Whiskey, Eagle Rare 17-Year-Old Bourbon and Sazerac Rye 18-Year-Old Whiskey. These whiskies utilize three distinct mash bills, or recipes, from Buffalo Trace Distillery: rye mash bill #1, wheat mash bill and straight rye mash bill. Aged and proofed at the pinnacle of their taste profile set by the distilling and lab team experts at Buffalo Trace, this collection is sold separately and only available once a year. Bottles should be available at retail starting early to mid-November. Suggested retail pricing is $99 each, state taxes will vary per market. Here are details of each expression in the collection:

Created in 2002 at the request of a fan for a well-aged and barrel-strength whiskey, George T. Stagg bourbon is well respected amongst bourbon connoisseurs and spirit judges. This year’s offering was distilled in the spring of 2007, making it 15 years and 5 months old at bottling. The proof is 138.7, the highest proof for this whiskey in the past six years. This year’s barrels were aged in warehouse K. Tasting notes for this bourbon call out toasted pecan and chocolate sauce on the nose, a rich blend of baking spice, vanilla and cherry pie on the palate, and a robust finish of black coffee, molasses and oak.

The Antique Collection’s uncut, unfiltered, wheated recipe bourbon is William Larue Weller. The previous release of this wheated bourbon was honored with a Double Gold medal at the 2022 San Francisco World Spirits Competition. The 2022 release was distilled in the spring of 2010 and barrels were aged in warehouses C, K and N. This bourbon registers at 124.7 proof. A nose of toasted coconut, butterscotch and caramel, followed by a touch of mint, dark cherry and molasses on the palate and a full-bodied finish with hints of leather, nutmeg, toffee and vanilla can be found in this year’s offering.

Thomas H. Handy is the uncut and unfiltered straight rye whiskey. Last year’s release earned 97 points and was named in the top 100 spirits by judges at the 2022 Ultimate Spirits Challenge. This year’s Handy was distilled in the spring of 2016; aged in warehouses I, L and M and weighs in at a hearty 130.9 proof, the highest proof for this whiskey since 2012. The flavor profile includes a nose with floral notes, anise, marmalade and meringue, followed by a palate with baking spice, a burst of orange peel and subtle dark chocolate, and a long finish of cinnamon, praline and candied orange.

This 101-proof whiskey was distilled in the spring of 2005 and barrels were aged in warehouses H, K and L. The 2021 Eagle Rare release was honored with the Chairman’s Trophy at the 2022 Ultimate Spirits Challenge. This bourbon has a nose with a hint of tobacco, chocolate-covered cherries and a touch of oak, followed by caramel, vanilla bean, dark chocolate and oak on the palate and a full-bodied finish with baking spice, vanilla and butterscotch.

Previous releases of Sazerac Rye 18-Year-Old were named in the top three finest whiskeys in the world by the “Whisky Bible.” This 2022 straight rye whiskey release has a nose of orange peel, lemon zest and molasses, a palate with a bold blend of black pepper, coriander seeds and maple syrup, and a well-rounded finish with mint, tobacco leaf and oak. The barrels for this whiskey were filled in the spring of 2003 and 2004 and rested in warehouses K, M and P. It is bottled at 90 proof.